Wait for it, wait for it… there. Now let’s hear it again!

That’s what people do quite a bit, as demonstrated by the following video of The Drop Machine, built by music hack day legend and director of developer community for The Echo Nest at Spotify Paul Lamere at Midem Hack Day. His creation finds the parts of songs that people tend to play over and over again — and as it turns out, this is a great way to find “the drop,” or the part of the song where everything really kicks in: 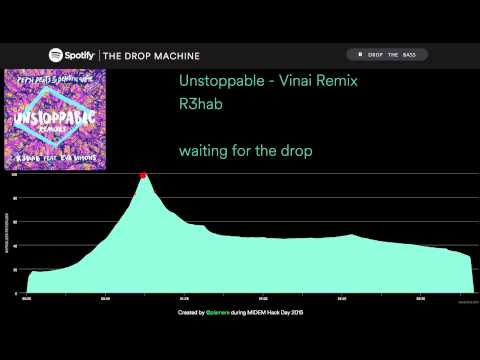 “The interesting bit in this hack is how The Drop Machine finds the drops,” explains Lamere. “I’ve tried a number of different ways to find the drops in the past – for instance, the app Where’s the Drama found the most dramatic bits of music based on changes in music dynamics. This did a pretty good job of finding the epic builds in certain kinds of music, but it wasn’t a very reliable drop detector. The Drop Machine takes a very different approach – it crowd sources the finding of the drop. And it turns out, the crowd knows exactly where the drop is.”

The rub is in the scrub. “Scrubbing” is an audio term that basically means playing the same part of a song over and over again. By aggregating scrubbing data from over 75 million music lovers worldwide, Lamere was able to find the “droppiest” songs, according to the crowd, including “In The Air Tonight” by Phil Collins, “Whole Lotta Love” by Led Zeppelin, “First of the Year (Equinox)” by Skrillex, and more you can read about on MusicMachinery.

It’s fascinating that by adding up repeat attention across millions of music fans, The Drop Machine is able to do something musical like figure out when the biggest, most dramatic part of a song is.

The above video mashes up a bunch of drops one after the other. The Drop Machine web app is internal-only for now, but could become available to the public.

Let’s take a look at a few examples over on MusicMachinery.