Incident Tech, maker of the advanced, iPhone-powered gTar, says it has signed landmark deals with major music publishers Sony/ATV Music Publishing and EMI Music Publishing after 18 months of negotiations to offer around two million song tutorials within the gTar app, which runs inside a special $400 guitar.

This is no ordinary music-teaching app, in other words.

For $0.99 per song, gTar players can buy a tutorial within the gTar iOS app download a full tutorial that lights up their guitar fretboard in helpful ways, using an iPhone embedded in the guitar, offering a new, easier-to-grasp way to learn songs — now including many major hits.

“When we launched the gTar initially, we made the promise that we would enable anybody to learn any song they wanted in just a few minutes,” stated Incident Tech director of brand Josh Stansfield. “With the addition of these amazing catalogs, we can fulfill that promise to our customers in 42 countries around the world.”

To recap, someone figured out how to build an iPhone into a guitar and connect it to lights in the fretboard to teach the guitar, leading to a successful Kickstarter campaign, some prominent investors, and eventual production in China. Now, it has two million songs, including major compositions from Lennon/McCartney, Jagger/Richards, Hendrix, and more.

In addition to its function as a teaching tool, this instrument, which we like for 10 reasons, also opens up crazy sonic possibilities such as the mind-bending “guitar Skrillex” scenario, because it’s MIDI-compatible and has an SDK.

I played the gTar with my own hands last year, and can vouch that it works, both as a teaching tool, and as a weird new instrument, because you’re playing sounds inside apps inside an iPhone inside a guitar. Those sounds can be anything the apps can play, so this goes beyond the idea of an effects pedal. For that matter, it also goes beyond teaching apps that show videos, because in gTar’s learning mode, all you have to do is follow the lights.

Purists will surely wonder whether what the the world needs now is a guitar with an iPhone in it. But would-be guitarists can always use this thing as a learning tool, even if they plan on graduating to a “normal” guitar, because it plays just like a normal guitar. And when they do, we have a feeling they might still return to the gTar, if only because it can fit a Moog into its pickguard. 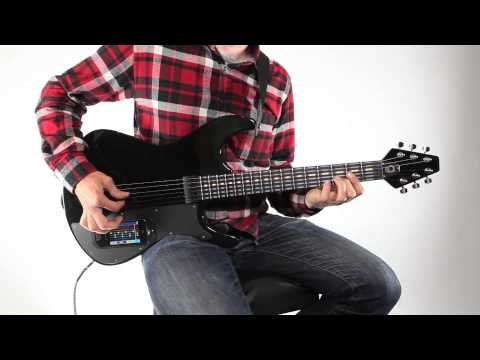