If you loved the television show Reading Rainbow, which aired from 1983 to 2006, and has since turned into an app — or you have a kid who loves it because you enjoy getting them into your old stuff — then this will be of interest.  You’ll also be intrigued if you’re a fan of host LeVar Burton, of Roots and Star Trek fame, because if you win this contest, you’ll be flown to LA to record a song with him.

What is this all about?

Smule, makers of some of the best-selling music apps of all time, has teamed with Reading Rainbow for a contest within its Sing! Karaoke app (iOS and Android), which Smule says has 175,000 daily active users. That’s a lot of people singing into their smartphones — not only for their own pleasure, but to share their songs with other users of the app.

To enter, you simply look for the Reading Rainbow theme song (“Butterfly in the Sky”) in the app, and then record your version of it before September 13, 2013. You can sing it as a solo — or as a duet with LeVar Burton himself, using the app’s neat collaboration feature.

“After 35 years of being in the public eye, despite the global phenomenons of Roots and Star Trek, it is Reading Rainbow that I most proud of,” said LeVar Burton in a statement. “People tell me every day how they grew up on the show and learned to love reading because of it, and many of them spontaneously burst into song! I am thrilled that starting today with Smule’s Sing! app, users can now join me in a ‘Butterfly in the Sky’ duet, or sing it by themselves and share it with the whole world.”

To enter your version in the contest, you’ll need to share it from the app with the hashtag #ReadingRainbow. Smule suggests that you favorite your own version, suggesting that community voting will play a part here, but ultimately, a winner will be selected by the organizers, which is nice, because it means this won’t be won by the most persistent gamer of the system.

One lucky winner will be flown to Los Angeles to star in a Reading Rainbow video with LeVar Burton, in person, singing the themesong. That video will appear in the popular Reading Rainbow app. And with that, you will become famous to a generation of children — and possibly your own, too. 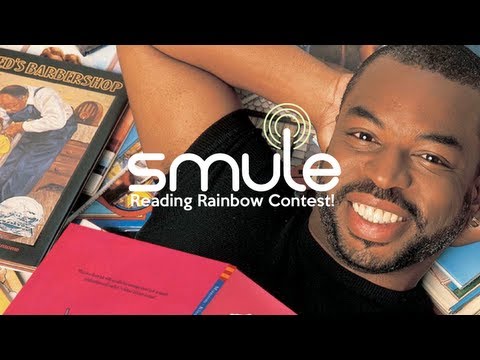