Last August, Cooper senior designer Golden Krishna, now of Samsung, set the design community aflutter with the bold assertion that the best interface is no interface (video below). In other words, get rid of the touchscreens, the mice, the keyboards, the graphics, the menus, and the rest, or at least as much as that is possible; just make open doors automatically, push news articles to readers rather than asking them to search or browse, and, in a music context, figure out what people want to hear without them having to do anything.

The internet being the internet, this powerful idea gathered steam on Twitter and elsewhere, leading to a groundswell of support, recognition and the SXSW 2013 presentation you can watch at the bottom of this post. Then came the backlash, most visibly from No to ‘No UI,’ from Berg creative director Timo Arnall, but also from another Cooper designer, who called Krishna’s idea ” interesting, provocative, and deeply flawed.”

The “no UI” debate typically breaks down along the usual absolutist lines — the same ones that pit Mac people against Windows people, iPhone against Android, and so on. You’re either with “No UI” or against it.

When we posted articles about how one music app, designed the right way, could rule them all, and another about how the problem with apps is smartphones, we weren’t familiar with Golden Krishna’s now-infamous screed, in part because that first article appeared well before his “No UI” essay surfaced.

However, the concepts are similar. The first article was about a music app that understands you and what you’re doing so well that you don’t have to select music manually — and even provides musical/audio cues for everything from the weather to traffic to Twitter. That concept applies “No UI” to music, while also turning music itself into an interface for other information.

The second article was about how it takes six or seven taps to skip a song in a smartphone music app, whereas grandpa’s CD player still skips with a single press of a button.

Clearly, the smartphone interface is not ideal for controlling music apps, but does that mean scrapping it in favor of a single “on/off” control? Of course not. The “no UI” movement makes sense, to a point. Computer screens have insinuated themselves in between us and the things we are trying to do, but only a lunatic would retreat from interfaces entirely.

There are over 30 million recorded songs on Earth, with more appearing each day, so the idea that a music app with no interface at all — basically, a speaker connected to the internet with some software attached, and no buttons or screen — can consistently play you what you want to hear would be fanciful, to be charitable.

If a song pops into your head, the way this one did into mine recently, and you want to hear it, how is a “No UI” music app going to know that? It’s not. Perhaps “No UI” advocates would suggest that we ask Siri to play the song, but that’s still not “no UI” — it’s just a different one.

This is not to say that music services should look like spreadsheets, or that smartphones should keep getting in the way of music apps. Maybe what we really need is “less UI.” That sentiment isn’t quite as catchy, and it’s hardly likely to lead to the usual “It must be this or that”-style debate, but at least it’s realistic, where music is concerned.

Luckily, buttons on the wall, Google Glass, Leap Motion, and other technologies are starting to make that happen. 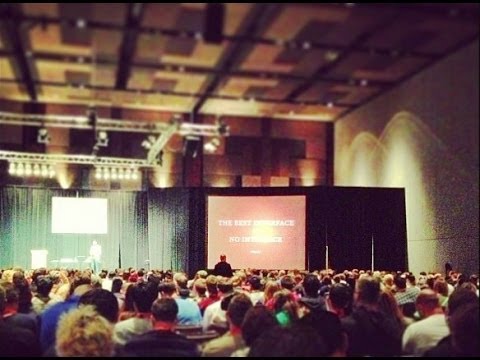