Last December, a pressure-sensitive grid about the size of the iPad called the QuNeo blew us away, after a successful Kickstarter campaign. The company behind it, Keith McMillen Instruments, has followed it up with another Kickstarter-funded device for playing music apps: QuNexus.

The company is sending us a unit for review, and we’re looking forward to that (even though we mainly cover apps for music fans, rather than apps for musicians). Keith McMillen Instruments promises plug-and-play compatibility with iOS, which should make it a breeze to set up, but we’re also excited about the musical possibilities of a small, portable keyboard that contains all of these extra sensors.

“QuNexus senses pressure, velocity and tilt, which let’s keyboardists play notes more like guitarist or horn player,” said Keith McMillen Instruments senior director of marketing, PR, and artist relations via email. “It pairs very well with iPad apps like like Animoog, Sunrizer and Magellan. I think it will be big among hobbyist musicians and prosumers. It’s also great for music learning apps like Synthesia, Piano Legend and Symphonix Evolution.”

Of course, a piano also senses pressure and velocity, and many keyboards can translate those into MIDI commands for apps and other software, but the QuNexus adds tilt, and wraps it all up in a small package (for something larger, you might try this). Also, apps can “talk back” to it by sending MIDI commands that change the colors of the keys, offering extended possibilities for performance feedback and music education.

Here’s a video of people playing the QuNexus, which has already shipped to Kickstarter supporters, and is shipping to other customers via a variety of sites for $149: 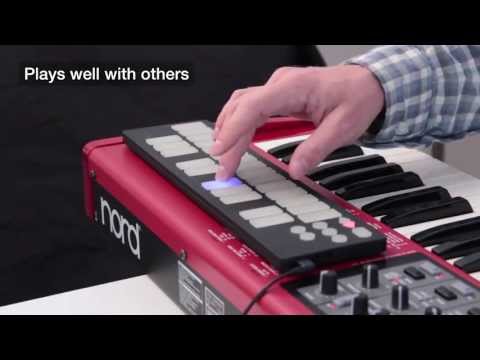