Before we get to the new version, let’s get right to the latest numbers for Songza’s activity-based music apps, which offer playlists for various activities, weekdays, moods, and times of day, because they are big:

Songza revealed these numbers on the occasion of version 3.0 of its iOS app, which adds nice cosmetic touches like a background that changes based on time of day, enhancing the idea of Songza as an app that reacts to your specific situation.

Another nice improvement, built after the company spend “hundreds of hours” talking to users, is a feature that lets you press a top-level category — say, “driving” or “feeling confident” — for two seconds, the new Songza iOS app will immediately start playing music, like the musical version of Google search’s “I’m Feeling Lucky” feature. If you thought today’s music fans wanted more control over what they listen to (i.e. paying for Rdio, Rhapsody, or Spotify), you’re mistaken about at least some of them, because that feature offers decidedly less control than the artist radio feature found on Pandora and elsewhere.

The rest of the app offers similar optimization — indeed, Songza co-founder Elias Roman told Evolver.fm that the company reduced the feature set in this app by about 40 percent, with an emphasis on reducing barriers between music fan and music.

For example, you can now shake the iPhone and then enter a word describing what you’re doing, and Songza will look for playlists for that, so you don’t have to hunt around yourself. And finally, the app lets you search all of its playlists by artist, if you want to find stuff that way. The app also now subtly pushes you away from playlists you appear to be tiring of towards fresh ones, and includes HQ Audio from Audessey, available exclusively to Songza among apps, that purports to make the music sound better depending on which headphones you use without increasing the bitrate of the music.

Back to the Pandora comparison, because Songza’s big numbers look small in comparison to Pandora’s — the top streaming radio service in the country, which reportedly has had trouble earning profits, because the way streaming radio royalties work, you pay out more for each extra listen, which makes it different from, say, a blog, which can take on extra users without incurring the equivalent increase in cost.

Will it help its bottom line that Songza knows, to an extent, what its listeners are doing?

It’s a good point: Knowing that sort of thing, especially overlaid with location and other factors, could drive ad rates up, and make internet radio pay better than it does with undifferentiated advertising. And from the user perspective — if you’re working out and in a good mood, would you really be too upset to see an ad for Gatorade? Heck, they could even sell you that stage one Gatorade for before a workout, the stage two one while you’re working out, and the stage three one for after (yes, there are three stages of Gatorade now).

We also uncovered another interesting tidbit: that not all of the playlists on this “expert-curated” service were built by people. We’ve been wondering about a Songza user called Radioza, who appears to have hand-created nearly 18,000 playlists. Was Songza paying college radio DJs in ramen noodles to stay up all night making these things? Who makes 18,000 playlists?

That user was actually an algorithm run by an outside company that auto-created playlists for the top 18,000 or so artists on Songza, said Roman. Going forward, he said, Songza will rely exclusively on people to power its playlists.

Those people include 35 in-house experts (freelance music experts and Songza staffers), brands and celebrities like Justin Bieber who contribute their own promotional playlists, and of course members of the community, who make playlists purely for others’ enjoyment, because the licensing terms mean that you can’t make a playlist for yourself to hear.

Songza 3.0 is available in the iTunes app store now. 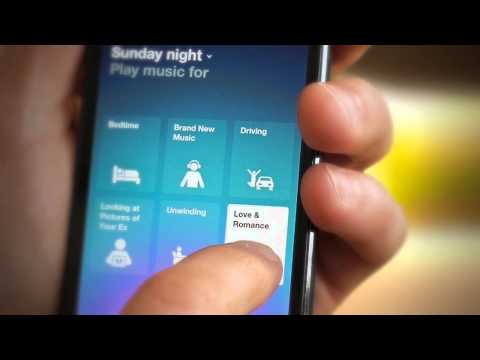