As crazy as it sounds, we might have to start paying more attention to Shaquille O’Neal for music app scoops. The basketball star awarded Optini‘s new app Speakerfy one of two prizes at his “Pitch Shaq” competition at SXSW last month; after investigating, we agree with his positive assessment.

Speakerfy (iOS/Android; free or $1; Windows Phone soon) makes the same music play on multiple devices at the same time, even if some are Android and some are iPhone. This makes it easy to listen to music with friends and family in different rooms of the same house, in a coffee shop, or other public setting — any situation where you’re near others you know, but want to retain your personal bubble, like when you’re close enough to someone to talk to them in person, but you find yourself texting them instead.

Perhaps the ultimate use case is a group of college kids studying in a library listening to the same music, but there are all sorts of uses for this (not the least among them: silent disco). According to Optini, you can even use Speakerfy to create a multi-room audio system by connecting phones to speakers around the house — or even use the smartphones themselves as speakers in a pinch, joining their little voices to form a sort of smartphone chorus.

However, Optini has yet to get back to us on how it syncs the music with enough timing precision to avoid weird phase cancellation when you use speakers (something Sonos claims it’s system does better than anyone else’s), so that might not work as well as claimed, with speakers (more on this below).

Basically, anyone with the app who is on the same WiFi network can join in this listening room. One person is the DJ, and everyone listens to the music stored on the DJ’s phone.

We’ve seen apps that sync up music on multiple devices before, but Speakerfy extends this concept across platforms, allowing iPhone and Android friends to play together. Soon, the solitary Windows Phone friend they probably don’t have will be able to join them.

It’s easy to set this up; just follow these simple steps:

One
Get everyone to install Speakerfy. You can use the free version if you don’t mind ads, or throw in a dollar to get rid of them. Other than the ads, the free and paid versions are identical.

Two
Connect each device to the same WiFi network. You can sync an unlimited number of devices.

Three
Open up Speakerfy on each device to begin searching for other devices using the app on the same network. It’s important to open the app on each device before continuing, otherwise they won’t be able to locate each other.

Four
Once all the devices are running the app, choose one person to be in charge of music selection and controlling playback, because only one person can DJ. That person will invite everyone else to join, which happens fairly seamlessly.

Five
Finally, the DJ can begin playing music just as he or she would on any music player app — but they can only play local files. Sorry, no music on iTunes Match, Rdio, Spotify, or anything else in the cloud.

Despite updates since Speakerfy’s release, the app still has some stability issues. Every now and then, a song would take forever to load, and we had to restart the app. We also a slight playback delay between devices, indicating that if you were to follow Optini’s advice and use Speakerfy with speakers, the dreaded phase cancellation issue that the company refuses to comment on would indeed be an issue.

However, these problems don’t prevent us from recommending the app for use with (several sets of) headphones. 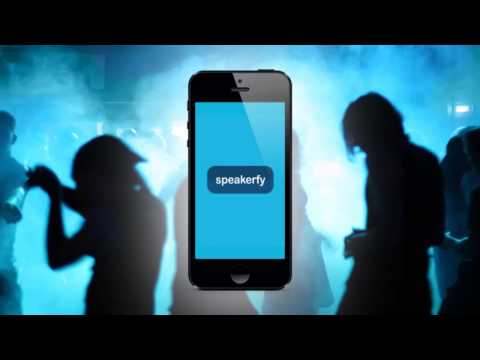