Wi-Fi desktop radios have been around for a while now. Most of them are lame. The one I have lets me surf a bunch of different internet radio stations on a tiny screen, bookmarking some of them as favorites. It’s like listening to internet radio on a computer ten years ago.

These Wi-Fi enabled radios, suitable for a kitchen table, garage, bedside table, and so on, might connect to the internet, but they are not “smart” in any other discernible sense.

For that reason, most people with a clue realize that any sort of Apple AirPlay or Sonos configuration is going to trump those desktop radios when it comes to piping digital music throughout the house. But there’s something nice about dealing with music hardware that has actual controls on it, rather than stopping what you’re doing, firing up an app, waiting for it to load, and then, say, skipping past the song that is driving you crazy with every second it persists.

Pimp My Radio, a hardware hack from Music Hack Day Stockholm 2013 (from Nick Dima Simone Lamberti, and Pierpaolo Di Panfilo), addresses the lameness of current Wi-Fi radios in a number of ways that should find their way into commercially-available devices:

Like our vision for the ultimate music app, Pimp My Radio recognizes that certain factors sometimes influence what you want to hear. Did you just wake up? Are you throwing a party? Are you cooking dinner? Breakfast? Are you trying to relax? Are you jumping rope, doing yoga, or rolling a ball back and forth with your kid? Are you perhaps attempting some sort of romance?

These are different scenarios, and different music goes with them, even within the same person’s musical taste. Apps like Songza, the “music concierge,” attempt to solve this problem somewhat, as do others. Why not migrate this feature into the desktop radio hardware itself, instead of including 10,000 canned internet radio streams that don’t care what you’re doing? That’s what Pimp My Radio does, with its handy situation knob, as you can see in the video below.

Most Wi-Fi desktop radios have screens on them, as do the radios in cars, on computers, on phones, and so on. Some of them display song and artist information there, but in the Spotify desktop app, it’s possible — and quite popular — to have the screen display lyrics as they play, with apps like TuneWiki (the top Spotify app out of the 67 that are available today) and musiXmatch (#5).

The fact that it takes three guys at a Music Hack Day to put this feature into consumer electronics should tell you everything you want to know about why more people don’t buy WiFi desktop radio. There’s a screen, and there’s data… why not put the lyrics there? Pimp My Radio does, because it’s there, and it’s actually relatively easy to do these days.

Integration with a Subscription

Pimp My Radio works with Spotify, but the same concept could work with Rdio or Deezer, both of which also have app platforms (though they aren’t as developed as Spotify’s). One advantage of doing it this way: If you subscribe, it can play higher-bitrate music than the stuff you hear on a typical internet radio station, but that’s not the only advantage of doing it this way.

“There is also a Spotify app to pick other ‘situations’ that fits your lifestyle,” reads the description, meaning that you’re not stuck with the default situations. “I’d swap ‘workout’ for instance with ‘lazy Sunday.’ You can also simply drag & drop your own playlists — let’s say your ‘indie stuff.’”

Integrating with a subscription music service also means that if people pay for it, they don’t need to pay again just to get ad-free radio on their kitchen table.

Here’s a video of the Pimp My radio prototype in action. Even if this particular object never makes it to market, the fact that three guys built it in a single weekend surely means that an established device manufacturer should be able to do something similar without too much trouble. I know I’d buy one. 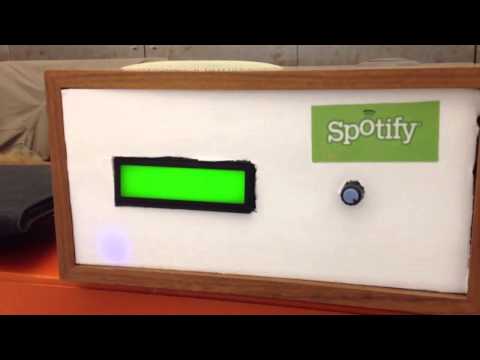