The legendary, awesome-in-every-way Neil Young recently took to the cablewaves to tease his Pono music ecosystem again — the one that will save music fans from compressed music and stupid white headphones, liberating us into a vinyl-like universe where the sound has soul, man, soul you can feel. One point he made on The Daily Show was that “people don’t have MP3 listening parties.

Sorry, Neil, but that’s not true. On Spotify, where I listened to Neil’s latest album (including the lyrics “I don’t want my MP3″), an app called Soundrop lets people all over the world listen to digital music together — and it’s only one of a bunch of different services that do this (see also Turntable.fm, Facebook’s “listen with” option, Google Hangouts, and more). Heck, even GIF Spinner does it.

Have you ever seen a turntable that can output sound to other turntables all over the world, at the same time, while allowing the listeners to talk to each other in real time? I haven’t.

So not only do MP3 listening parties exist, but they have a few additional features — and they now exist in multiple dimensions, sort of.

Let me explain. This week, Soundrop made good on its intent to release an SDK for scaleable group listening, which lets the same online listening room exist in multiple places — including on phones. Online listening partiers are not even in the same virtual room anymore. Far out!

The first artist to get this multiple-instance listening room treatment is world-famous DJ David Guetta, whose “PlayGuetta” room exists as its own Spotify app and also as a room within the Soundrop Spotify app. And according to what Soundrop CEO Inge Sandvik told Evolver.fm, these rooms could also appear on the artists’, labels’ and any other website, although that was not the case with PlayGuetta.

“The room in the PlayGuetta app is also the room in our app,” said Soundrop spokesman Thomas Ford. “From our perspective, it’s really about what you can do with this room concept. And of course it gives fans more ways to access David’s music and really connect with such a seminal artist.”

This really is nuts, if you think about where it’s going: people all over the world, on multiple websites or in multiple apps on multiple devices, all listening to the same music at the same time, with full chat and other interactive options.

Sure, Neil — they won’t all be in the same room, the way they are with your vinyl listening parties, which is clearly an advantage in terms of creating a natural sense of community around a particular release. But these digital music group listening parties already happen — and they just got a lot more interesting, now that the rooms can be cloned across the entire internet, along with the people inside them.

We expect other artists to follow Guetta’s lead, now that Soundrop has figured out how to crack this particular nut.

“We were incredibly excited to work with a company as forward-thinking as EMI, and the app is generating a lot of interest from people who would love to do something similar,” said Ford. “It’s really a great showcase of how you can build a social Spotify app for an artist and their fans.”

(Also, we should point out that Neil Young said “nobody has MP3 listening parties,” and Spotify uses the OGG instead of MP3, but still… it’s apples and oranges. Besides, there’s nothing that would prevent group listening from being a feature on Pono 2.0. 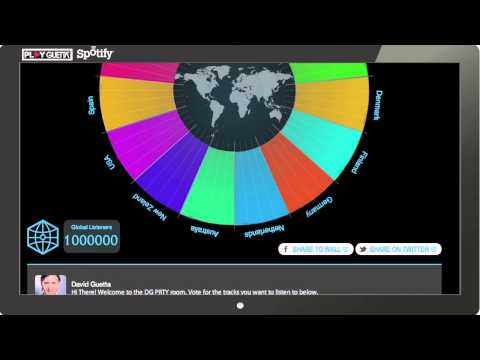