Paul Lamere, who earlier wrought havoc on Queen’s “Bohemian Rhapsody,” has trained his song-hacking sights on (what else?) “Gangnam Style,” the pop sensation from Korean popstar Psy that continues to sweep the globe and inspire awkward analogies.

Update: It gets better.

The awe-inspiring result: Infinite Gangnam Style, which anyone with a web browser (i.e. you, right now) can use to play a never-ending version of the song until their brain melts and they have to hit the “Make it stop, please” button. How long can you take it? Test your mettle and find out!

The app works by slicing the song into discrete units using The Echo Nest’s analyzer technology (Lamere is director of developer platform for The Echo Nest, publisher of Evolver.fm), and then taps the analyzer again to figure out which segments sound similar to each other.

Explains Lamere on his blog,

The song is played beat-by-beat — but with the added twist that any time we play a particular beat there’s a chance that we will transition instead to one of the beat’s similar sounding neighbors. For a pop song like Gangnam Style there’s lots of repetition so there’s plenty of good transition points. The result is that we can loop through the song forever with the song always morphing.

Since the Gangnam Style video is a key part of the song, I’ve included a dynamically remixed video in the web app too. (The mixing is done just be image swapping, there’s no way to dynamically control a video player as far as I know, which is why this app will load about 2000 images ;).

Here’s a video of the app in action, but it ends. For maximum amusement, try the real thing yourself. 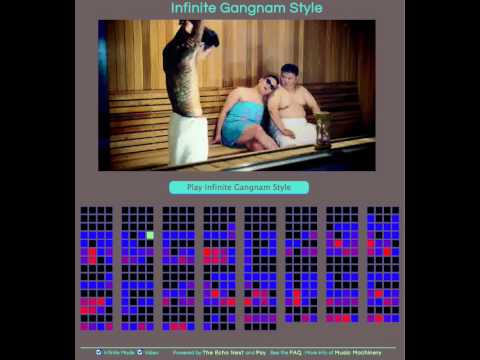 This Day in Pink Floyd

iRig Recorder
Turn Up The Love