Pro-audio manufacturer Focusrite recently introduced the iTrack Solo, an aluminum two-channel interface designed for recording instruments and vocals on an iPad, at a coming-out party in Manhattan. Featuring a dual-input audio interface and Focusrite’s low-distortion microphone preamp, the iTrack Solo is also compatible with both Mac and PC computers.

But the neatest thing about it is that it lets you record excellent-sounding audio to the iPad. Your mobile music studio just got not only smaller, but cooler.

During a demo of the product at the Gibson Guitar Showroom at the legendary recording studio The Hit Factory in New York City, Focusrite’s Brandon Carroll explained two keys to iTrack Solo’s success: 1) the device connects to the iPad through the 30-pin connector rather than the headphone jack, providing a higher quality audio signal; and 2) the device supports up to 24 bit /96 kHz audio resolution, whereas many other audio recording devices top out at 16-bit.

We have a test unit, and it works with your recording app of choice on iOS, Mac, or PC. One caveat we have is that, obviously, this thing is designed for recording one musician at a time (thus the name “Solo”), and it’s designed for mono instruments and mics (you can record both at the same time). However, that should suit most home recorders/producers just fine.

The other caveat: The iTrack Solo needs to be plugged in to a wall outlet in order to work with the iPad, so it’s only mobile to an extent. This is understandable, because the audio processing and lights need more juice than your iPad can provide.

We were impressed with how simple the iTrack Solo is to use. First, open up your favorite music making app, like GarageBand. Next, connect the device to your iPad using the enclosed device link cable and either to a power source using the enclosed USB cable and your iPad’s USB plug adapter or to your computer. If you want to hook up your device to speakers for playback, simply use the two phono connectors on the back of the device, which lets you listen to previously-recorded tracks without latency from your recording app.

Once you have completed the setup, you’re ready to plug in and play. Using the ports on the front of the device, connect your guitar, bass, or keyboard, and a microphone. The device’s use of phantom power allows you to use top-quality condenser microphones. Hit your app’s recording button, and begin playing.

As you play, “halos” surrounding the device’s input knobs will let you know if you are recording at the correct level (green halo) or at too high of a level (red halo), which is a clever, intuitive way to depict how hot your signal is. After you have finished recording, you can mix the track and adjust volume levels on your iPad. (To see a full tutorial on how to use the iTrack Solo, check out the video below).

Not only were we impressed with how user-friendly the device was, we were also impressed with the sound quality. Bringing over twenty-five years of pro-audio experience to the creation of this product, Focusrite has definitely raised the bar for iPad audio recording.

The Focusrite iTrack Solo is available in stores now, and will set you back $160. 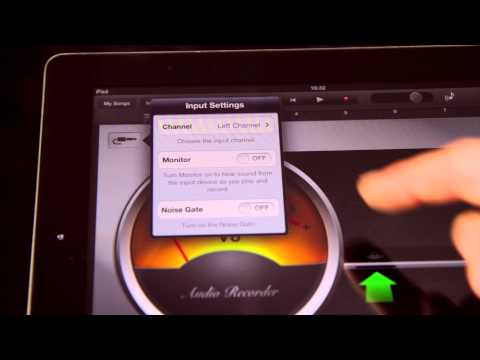 Get The Most From Your iPods
iMediaShare Lite