One of the neatest aspects of last week’s DUMBO Summer Friday festival was that it put music app developers on the same stage (or near it) as the musicians. One presentation in particular combined elements of both app-building and live performance: Bangarang Boomerang, a robust, grid-like web app that lets you manipulate Skrillex’s dubset masterpiece, “Bangarang.”

You can try it yourself here, but first, it’s worth learning a bit about what this thing actually does. By manipulating the cursor that moves through the song, you can let it play out as normal, pause on any chunk, move backwards through the song or hover on the same chunk (with the directional keys), click directly to any other chunk (with the mouse pointer), and more (full controls below).

(Update: This app only works with the Google Chrome browser.)

As for the colors of the chunks, those represent the timbre of the music contained there so you can sort of see what kind of chunk you’re jumping to. This is particularly helpful for if you’re trying to locate a mellow chunk to loop for a while and then hit the “drop,” to use the dubstep parlance for “that part in the song that’s all ‘bwaaahhr.’” As one would suspect, the length of a chunk indicates how long it plays — something you’ll really notice if you tap the ‘b’ button to toggle between beats (the default) and the shorter tatums (defined as “the pulse of the lowest metrical level”).

Developers Paul and Jennie Lamere (who also built Bohemian Rhapsichord, which lets you remix the Queen song by the same name), said they chose the song because it’s “locked in” to an exact tempo throughout, so you can skip around fairly non-disruptively without the timing getting thrown off. In addition, despite its lockstep groove, each measure in “Bangarang” contains distinct sonic elements that don’t repeat much, so you can create lots of variety by re-jiggering the songs elements, which might sound repetitive until you delve in with your ears. (Note:Paul Lamere is director of developer platform for The Echo Nest, publisher of Evolver.fm; Bangarang Boomerang is powered by both Skrillex and The Echo Nest’s analyzer, which he used to split the song apart into chunks, establish their timbre and length, and so on.)

Feel free to make fun of the dubstep genre as much as you want; just play around with Bangarang Boomarang first, to make sure you don’t actually love it, at least a little bit (and while you’re at it, you might as well check out The Wub Machine too). Here’s the full set of instructions for when you do, courtesy of the FAQ:

Give it a whirl. The following video demonstrates the possibilities (hint: keep an eye on that number at the upper right, which shows how fast you’re moving or skipping through the song): 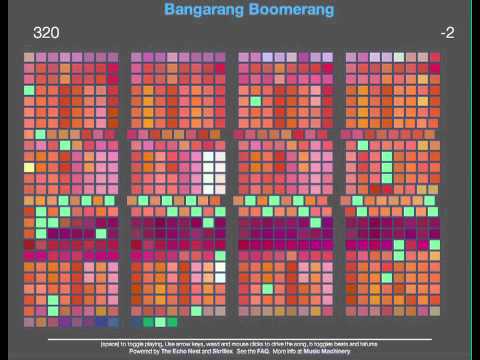