Passion Pit struck upon an intriguing way to promote its critically-acclaimed new album, Gossamer, while giving fans new ways to enjoy some of its music: the Gossamer iOS app. This two-song app was created by music app visionary Scott Snibbe, the same man who helped Björk blow everyone’s mind with her Biophilia app album.

Passion Pit: Gossamer ($2) includes two songs (“Take a Walk” and “Carried Away”), each playable in two modes for a total of four experiences, all based around an intriguing pattern of shapes.

“The imagery for the app is all based on a bubble-like diagram that’s technically called a ‘Voronoi Diagram,’” explained Snibbe, who developed the app in conjunction with Passion Pit. “I learned about this pattern in college and it always fascinated me because it relates to everything from the structure of cells to the gravitational influence of stars. We chose it for this app because the first song, ‘Take a Walk’ is about the financial bubble, and the hangover healing process coming out of it, so I thought this fragmented bubble imagery fit both metaphorically and psychologically.”

The interactive mode (available for both songs) lets fans create their own shareable music video for each song. Tapping the screen creates new shards in the animated mosaic that flips between photos of clouds, water, people, and other scenes by artist Mark Borthwick. Basically, it’s an interactive slideshow that plays in time with the music, and you can control it with your fingertips. This interactive mode is sort of neat, even though you can’t share your creations with friends — just screenshots. What interested us more was the remix mode, which lets you rebuild or shape the songs themselves, instead of just the visuals.

The “Take a Walk” remixer lets you tap to create new divisions in the screen with little lines that vibrate when they play a note. These are notes that the user has actually added added to the song, and yet the app adapts the song around them so that they make sense. You sort of need to try it to get how it works, but here’s what it looks like (that pink line on the lower right is vibrating and playing a note):

The “Carried Away” remixer is a little more straightforward, and it too relies on the Voronoi Diagram, which delineates the screen into shards representing one-hit samples or loops. To play them, you simply tap the appropriate shard (or tap it again in the case of a loop, to stop it). According to Snibbe, it’s actually possible to recreate the song “Carried Away” as it was originally recorded using the app; he hopes someone will figure out how and upload their performance to YouTube.

Helpfully, “Carried Away” comes with a map of where the samples are:

To demonstrate the app in action, here’s Passion Pit drummer Nate Donmoyer (left) and bassist Jeff Apruzzese (right) playing with the app for your possible amusement: 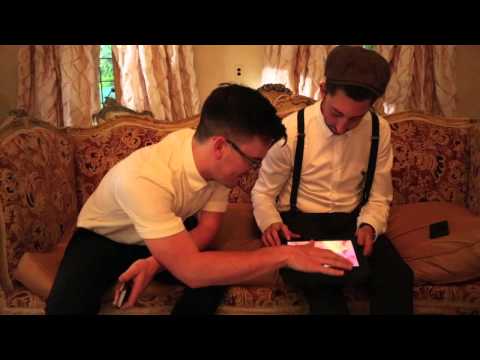 Passion Pit: Gossamer is pretty neat, but it does cost $2 — as such, we recommend it for people who are really into Passion Pit (especially if they have an iPad), as opposed to casual fans who have simply heard the band’s name before.

Are you unsure of your level of fandom for Passion Pit and therefore unable to decide whether this app is worth it? Never fear — the whole Gossamer album is available for free streaming.

(Evolver.fm is on a reduced posting schedule due to a sort-of vacation on the part of its editor; we’ll be back to full time next week.)

Live Nation
They Might Be Giants
Just Hear It
BlackMetal Man

Katy Perry ringtone
SoundCloud
How to Be a DJ