Attendees of today’s Google I/O afterparty in San Francisco will get a sneak preview of Shimi, an interactive, smartphone-powered “robotic musical companion” that combines many of our favorite music-related app capabilities.

Developed by Georgia Tech’s Center for Music Technology, and introduced by the new start-up company Tovbot, the music-loving bot acts as a personal DJ and entertainer by playing music from an Android or iPhone, which it carries around; recommending new songs to users; and busting out different dance moves for each new song that it plays though its stereo speakers, which it can aim directly at the listener, all on its own.

“Shimi is designed to change the way that people enjoy and think about their music,” said Professor Gil Weinberg, director of Georgia Tech’s Center for Music Technology and the robot’s creator. (Weinberg also made ZoozBeat and helped our editor judge a music robot competition.)

In its most elementary role, Shimi acts as a smartphone speaker docking station. Unlike a typical dock, however, Shimi uses the phone’s camera and face-detection software to locate the listener in the room, and then positions its “ears,” which are actually or speakers, to produce optimal sound.

The robot’s more advanced features include music recognition based on rhythmic input. When a user claps or taps the beat of a song, Shimi will analyze it, identify the song in the phone’s music library, and begin playing it.

Future apps in the works will allow users to skip songs by shaking their head and change the volume with hand gestures. The robot will also be able to recommend new music based on users’ music preferences and provide feedback on the music playlist. Expect to see gaming, education, music making, and sharing apps as well.

An API for third party applications is also forthcoming, which should lead to some interesting developments, as other developers get their hands on Shimi. Professor Weinberg hopes they will be inspired to create more apps to expand Shimi’s creative and interactive capabilities.

“I believe that our center is ahead of a revolution that will see more robots in homes, bypassing some of the fears some people have about machines doing everyday functions in their lives,” Weinberg said.

Weinberg is in the process of commercializing Shimi and expects to launch the robot at the 2013 Consumer Electronics Show. 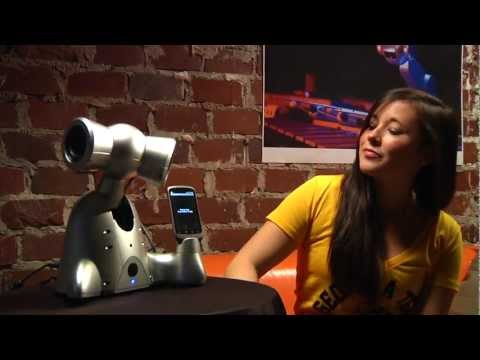 Shimi was developed in collaboration with the Media Innovation Lab at IDC Herzliya and led by Professor Guy Hoffmann. Entrepreneur Ian Campbell and robot designer Roberto Aimi were also part of the Shimi team.

This is the third robotic musician created by Georgia Tech’s Center for Music Technology. Haile is a percussionist that can listen to live players, analyze their music in real-time and improvise with music of its own. Shimon is an interactive marimba player.