Here’s what it will do for music fans, according to what we know so far:

Change Color With the Beat. The spherical Google Nexus Q has “32 LEDs” around it that “shift and change color in time to your music,” sort of like a software visualizer. Google says you’ll be able to choose your favorite effect. This sounds cool.

Social Music Selection. As with the Sonos system, Google Nexus Q will allow multiple people to add songs to a queue. This could make it attractive to people in offices, apartments with multiple roommates, and family homes. However, you’ll only be able to add the songs to the queue from an Android phone or tablet. In the video below, Google says this is “the first device that lets you create a social playlist with your friends.” That is utter hokum, but the feature is still great to have.

Multiroom Music. According to Google, you’ll be able to sync multiple Nexus Qs around your house, playing the same music on all of them. You can also do this with Apple’s AirPlay devices, although according to Sonos, that leads to phase cancellation (which can affect sound quality, because the music doesn’t arrive at the speakers at the same time). However, we have not noticed that effect with AirPlay systems, and suspect we won’t notice it with Nexus Q either.

Power for Speakers. The Google Nexus Q has a 25-watt “Class D” amplifier. According to my extensive research into “Class D” amplifiers, that will be more than enough power to fill one or more rooms with music at a loud level, because they are far more efficient than the ones you’d find in grandpa’s hi-fi system. Class D amps are already fairly green, and Nexus Q makes this one even greener by shutting down the power to the unit automatically when it’s not in use. (Incidentally, Google will sell you $50 speaker cables or $400 speakers to go with the Nexus Q, but you can probably do better on both fronts in terms of price/quality.)

At Least Two Music Apps. We know that Google Nexus Q runs Android 4.0 (the so-called “Ice Cream Sandwich” operating system). We also know that SiriusXM and other app developers are going to demonstrate their apps later today on some sort of Google TV device. Is this that device? It looks fairly likely, although for now, Google only lists three compatible apps (two that play music), and they are all made by Google:

To be fair, third-party apps for Nexus Q could be coming later; SiriusXM says its app will be available from Google Play “soon.”

Bluetooth. In addition to WiFi and NFC (near-field communication), Nexus Q has a third wireless compatibility: Bluetooth. This should mean that you’ll be able to beam music from any app on any smartphone (including the iPhone) to the Nexus Q and have the music come out of its speakers, the same way you would with, say, the Jambone Jambox.

Optical and Digital Outputs. If you like super-clean sound and you have a modern home entertainment unit near the Google Nexus Q, you’re in luck. The device includes a TOSLink (S/PDIF) optical connector, as well as an HDMI port, so you can send the 1s and 0s that represent your music to your more expensive home theater system with a single, thin wire, and do the D/A conversion there.

Here’s Google’s video of the device, which is (of course) available on YouTube: 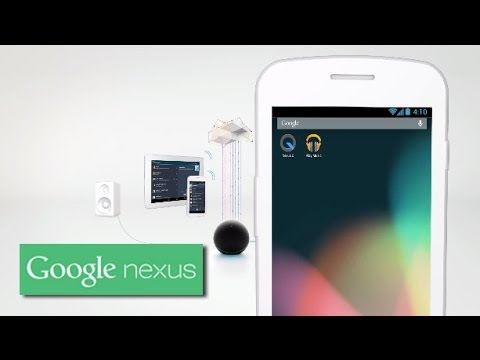