The Flaming Lips hacked FM radio as part of their boombox experiments, which started in the '90s. Smartphones are better than FM radios.

The Flaming Lips blew us away in the ’90s, when they invited the crowd onto the stage as part of their infamous boombox experiments. Frontman Wayne Coyne conducted the performers like some sort of mad Leonard Bernstein, telling each side of the boombox orchestra to turn up their volume knobs at the appropriate times. (The FM tuner knobs were all glued to stay on the proper frequency, so that the Lips could beam the right music tracks to it at the right time). Look, interactive music — and it’s live.

My brother’s band also experimented with FM radio at live gigs with its “boombatas” – brightly-colored boomboxes all tuned to the same FM channel that broadcasted their set as they played it live. Sometimes, they would even mic the boombatas, feeding the result back into the PA.

Now, it’s 2012. We live in the future. Half the people you see in line for any show have a computer in their pockets that would put yesterday’s mainframes to shame. Hacking FM radios was great, but now that so many show-goers carry little computers that are capable of running complex, bespoke software (i.e. apps), and which can connect to both each other and a central server, we will surely see some crazy new ideas develop along these lines that make FM radio at shows look, well, old school.

This question is arguably more important than ever, now that EDM (electronic dance music, duh) artists are looking for ways to prove that what they do on stage involves more than just pressing a button or two. If the audience is what makes those shows special, as Deadmau5 claims in that piece, (see my earlier unrelated interview), why not give them more to do? The boombox experiment should turn into the smartphone experiment.

It’s already happening. We’ve already seen early indications of what concerts will look like once bands and app developers team up to explore the possibilities for putting on a concert when at least half of the crowd is holding a networked computer with a microphone, screen, processor, and speaker. Bonus: making apps part of the concert means people won’t just be standing there shooting video the whole time; instead, they’ll be enhancing the show. For smartphone-phobic bands, other options exist that don’t even use the phone.

Here are the best concert apps we’ve seen to date. Please let us know if we missed any, and if we post a follow-up, we’ll link to the website or charity of your choice.

When we first heard about this one, we were admittedly a little carried away because what it does is just so clever that we didn’t realize the guy telling us about it misspoke when he said Lady Gaga had used it on her Monster’s Ball tour (and we’re not ashamed that we did not know that firsthand). Anyway, this one has crazy potential, which is why it tops our list. The basic idea is to include inaudibly-high frequencies in the sound of the band, with the option to include different frequencies in different speakers so that your smartphone picks up a different trigger (or combination of triggers) based on where you are standing.

Once the smartphones in the audience pick up the signal with the Sonic Experiences app for Android or iOS, their phones can be told to do all sorts of things: Play prerecorded notes, display a certain color or animation, record the sound from that particular seat, take a picture of the stage or show-goer, and so on. It’s brilliant in its simplicity, because the trigger gets included in the song itself — no need to employ a tricky mesh network to keep everything in sync.

SonicNotify, whose technology began as a way to crowd-find New York City busses,  has yet to launch anything, as we discovered when we updated our February story about this. Though it has yet to ship, we have seen it in action with an online Coldplay concert, and its list of partners is promising: Twitter, Samsung, Spotify, SmartWater, and Milk Studios.

I would personally be just fine if no one ever told me to wave my hands in the air again. Even shouting “woo!” feels trite, and don’t get me started on the people who shout “freebird!” at anything that moves. Nike taught us a thing or two at SXSW earlier this year about how audiences can “interact” that doesn’t involve making the rest of us lose their minds. The key to it all, in that case: smart wristbands that told the venue how much people were moving about — sort of like a real-time danceability meter for the show in question (which in that case, was Diplo and Sleighbells).

Measuring movement is an easy one. A band could also lend out gizmos for measuring heartrate, skin moisture, eye direction, or anything else the body does as a response to music, and use that as another input to then feed back into the music, lights, or both. My favorite litmus test for music is anything that makes my arm hairs stand up on end, but that’s just one of the body’s biological responses to liking, hating, or otherwise experiencing music. Doodads that can measure that stuff are getting cheaper all the time — or, if they’re not, a band could select just a few fans to get these devices, or maybe require that you let them hold your driver’s license. The point is: biofeedback, even though it’s sort of creepy, could make shows a lot more fun while literally getting the fans more involved.

Some of the items on this list are still in their protean stage. This one is a reality. In part, this is because its reach does not exceed its grasp. We were blown away by this one when we first saw the prototype in action at SXSW 2011, and now, it has been released into the iTunes app store as Ampd. This app, which is relatively simple compared to the others on this list, lets fans vote on which song the band should play next; answer quiz questions; hold their phones up to display custom animations that play at exactly the right time (an artist could turn one side of the venue blue and the other red, and so on); and of course let people buy the currently-playing song.

Rather than (or in addition to) relying on fans and their smartphones, venues themselves can be tricked out to interact with the music. Nike showed us that trick at SXSW too — the color of the building changed based on how much people were dancing, using the wristbands mentioned above. Cameras, microphones, displays, and little booths you can enter to appear virtually singing on the stage — the sky is the limit to what you can do in a building. Actually, it’s the ceiling, but what’s a mixed metaphor or two when you’re talking about the future of dancing about architecture?

The Beastie Boys set the standard, in some circles anyway, for allowing fans to film concerts with their “Shadrach” video from the Check Your Head video, available first as filmed by people in the crowd from four different angles: 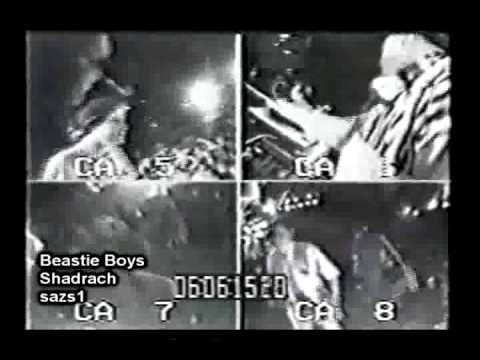 and then available in an “abstract impressionist” version that had been painted over, frame by frame: 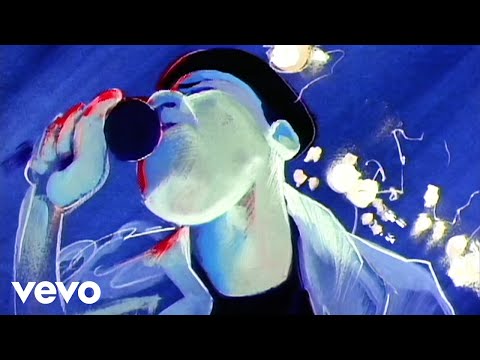 This was mostly the work of one Nathaniel Hornblower (a.k.a. the late Adam Yauch), and it happened in the early ’90s. Today, half the crowd seems to be filming shows, but that’s just for their own viewing pleasure, or maybe to upload the next morning.

Smartphones are not only more capable than The Flaming Lips’ FM boomboxes, but they’re also more ubiquitous than whatever cameras were used to film that from the crowd. Surely, someone can come up with an app that lets the AV tech switch between hundreds or even thousands of smartphone camera views, either to display on a big screen (possibly with neat real-time visual effects that react to the music), or to stitch together later as a record of the show, along with professionally-recorded audio from the soundboard, because that’s easy if you’re with the band. What’s not easy: filming everything in the venue from just about every angle.

Again, let us know if we missed any. We’ll update the list and let you know.