First, apologies to the 90 percent of our readers who don’t get the headline. You were either too old, young, remote, or oblivious to have been infatuated with the Breakin‘ movies in the 80s.

But it’s true, Smule’s Ocarina, one of the first mega-popular breakout music apps, has been updated to a new version, Ocarina 2, although the original is still available. Ocarina 2 is free for iOS devices, with a premium pack and additional song pack each available for a buck as in-app purchases (you can also unlock a healthy selection of new songs with your achievements, without paying).

Unlike the Breakin’ 2: Electric Boogaloo, which was a big let down to us up-and-coming breakdancers, Ocarina 2 only grows the legend further, with an ingeniously-designed teaching mode that can teach you how to play everything from “Theme from Zelda” to Justin Bieber’s “Baby” — not that we would recommend the latter, when such gems as “Oh Shenandoah” and “Over The Rainbow” are also included.

In the screenshot to the above right, you can see how it works: by letting you work your way through the various finger configurations required to produce each note. It’s remarkably easy to do, even as you’re blowing into the iPhone’s microphone to produce the sounds; you can look down and see what note is coming up, and play it. In no time at all, you can be the Ocarina wizard you always wished you could be.

According to Smule, over six million people have expended over two billion breaths of air into the first version of this whimsical app — possibly more than actually play the real-life ocarina worldwide. As with the previous version, you can listen to what other people have made with the app — something users of the first Ocarina app have done 47 million times so far. The new version includes the same “world view” (pictured left) with which you can listen to what other people are playing with this beautiful-sounding app.

Of course, you don’t have to follow the playbook — the Freestyle mode still lets you jam out on whatever you want, in whatever musical mode you want — something that I, who taught myself “Ode To Joy” on the first Ocarina app mere minutes before playing it on live nationwide radio, appreciate. Perhaps the best thing about the new teaching mode is that it facilitates the process of finding your way around the instrument, so you can play whatever you want. Take my advice though — if you plan on playing it on live radio, practice up. Another new feature, Dynamic Harmony, can even accompany your playing, and the new “whistle” mode is a blast (it slides the pitch between each note you play). 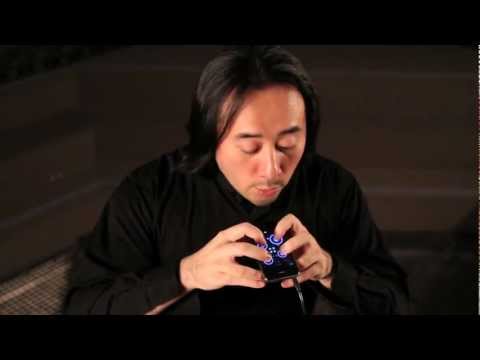