You have to hand it to good old J.S. Bach for the latest project taken up in his name: a successful campaign to open-source and app-ify one of his most beloved works, The Goldberg Variations.

The Open Goldberg Variations project is a dream come true for Bach enthusiasts, open-source fans, app-makers, remixers, mashers-up of all stripes, and anyone with interested ears, created with the aim of “Setting Bach Free.” Pristine recordings of this masterwork are available for free in sound qualities all the way up to 24-bit 96 Kbps FLAC (torrent), but that’s just for starters.

In addition to the recordings (listen below), which are free for anyone to do whatever they want with (redistribute, remix, download, mash-up, etc.), this project entails a free iPad app that lets you listen as you follow along on intelligent sheet music, which is just plain neat — or, if you catch the live show, or an upcoming Wisconsin Public Radio performance, you can follow along with a pianist (video below). The app is neat, but it should be just the beginning of Open Goldberg Variations project. Other developers and musicians can build whatever they want using the recordings and intelligent score.

The project raised $23,748 on Kickstarter to fund the project, nearly $10K more than the initial budget — and it all started at a Music Hack Day. Open Goldberg Variations project manager Robert Douglass, MuseScore CEO Thomas Bonte, and pianist Kimiko Ishizaka took this first-of-its-kind show on the road with a performance that allowed the audience to follow the score automatically, measure by measure, on any device with a browser and a microphone: 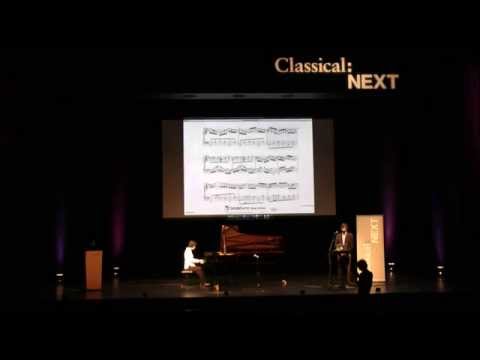 Bonte explained the technology behind this thusly:

It’s an amazingly comprehensive project, especially considering that the whole point of it is to liberate Bach’s work, whose copyrights have lapsed into the public domain, with no strings attached.

“Kimiko Ishizaka, an award-winning pianist… volunteered to play the Goldbergs without compensation and with no claim to copyright. Both the score and the recording will be placed directly into the public domain,” says a project spokesman on the project’s Kickstarter page. “To guarantee that the score and the recording are always part of the public domain, they’ll be licensed using the Creative Commons’ zero tool. Everybody will be free to download, copy, distribute, mash-up, or remix the recording.”

Little known fact: Bach was related to so many musicians that the word “bach” meant “musician” in his area by the time he was born.