It never ceases to amaze when buttons in a web browser control physical things in the real world — whether it’s a remote-controlled rifle or, less ominously, the modular synthesizer pictured above.

But that’s exactly what you can do via the web interface pictured here, called Patchwerk. It controls the Paradiso Synthesizer, a hardware modular synthesizer at MIT Museum (“modular” in that the synthesizer consists of modules that must be connected by wires). According to its creator, MIT associate professor Joe Paradiso, it’s  “probably the world’s largest homemade modular synthesizer.”

You can control it from right inside your web browser — another sure sign that we live in the future. Here’s what that looks like:

Due to the fact that modular synths include all sorts of variables — and that this one happens to be absolutely massive — you might not hear a direct correlation between flipping a switch and the sound; other times, the effect is clearly noticeable.

To try your hand at this, simply visit Patchwerk to start listening along with what other people might be doing there, and when you get the urge, enter your name in the text box and hit return to become a Controller instead of just a Listener. This will enable you to turn the knobs on the left , flip the switches in the middle, and push the buttons on the right, along with whoever else is a Controller at the time. (Depending on how popular the synth is at any given time, you might have to wait for your turn).

Here’s a short trailer about it: 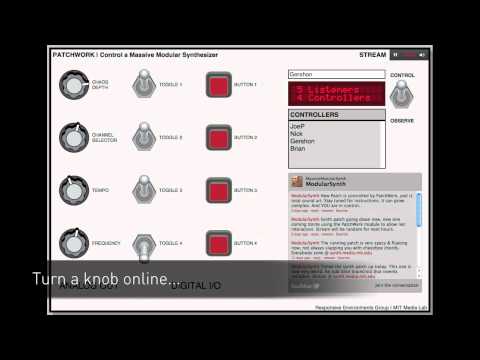 And here’s a video in which Paradiso discusses the hardware synthesizer itself: