AUSTIN, TEXAS — The biggest app at this year’s SXSW wasn’t Highlight or Glancee, physically speaking. It was the building pictured to the right, which Nike essentially turned into a music app as part of its Diplo/Sleigh Bells party.

The company’s new Fuelband wristband ($149) tracks how active you are throughout the day as you exercise, walk around, dance, and more, helping you reach your daily goal to increase your fitness level. It tracks your activity on a social network, so you can publicize your results and compete with the rest of the community. And, of course, there’s an app for that.

To promote its new product, Nike essentially turned the inside of a venue (video below) into one huge Fuelband wristband with the same colored lights and ability to track energy level.

Except in this case, Nike was tracking the energy level of the whole crowd.

This brings us to the building pictured to the right, in downtown Austin, Texas. The more energetic the crowd, the greener the building became, so that people outside the event could witness the level to which the crowd was going off. It helped that Nike picked two very high energy bands for this show: Diplo and Sleigh Bells. Nike measured the crowd’s energy level by placing Nike FuelBands on the wrists of a large number of attendees, then tracking the activity using customized wireless technology that functions similarly to the way the iOS app works.

This was clearly a one-off promotional event, but it’s such a neat idea that we wouldn’t be surprised to see more hardware feedback showing up on a similarly grand scale. We can build it. We have the technology.

In related news, Nike unveiled an API for Fuelband at a SXSW hackathon organized by Lady Gaga’s manager this week, so that enterprising developers can hook into its data to develop their own apps that work with the wristband. 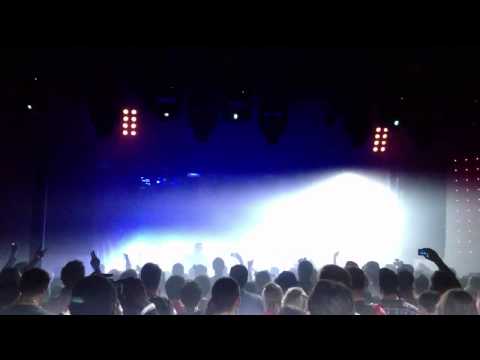 Photo: Thomas Van Buskirk, who contributed to this report