In this screengrab, M.I.A. is about to flip 111.3 million Super Bowl viewers the bird (full video below).

Madonna’s half-time show at the Super Bowl drew mixed reviews, but one thing everyone seems to agree on is that M.I.A. managed to sneak an obscene gesture into Sunday’s broadcast, which drew a record-setting 111.3 million viewers.

M.I.A.’s attention-grabbing moment appears to have had the desired effect, at least where music blogs are concerned. According to Shuffler.fm, which tracks the most popular artists on music blogs on its iPad and web apps as part of its mission to turn music blogs into an audio magazine, M.I.A. is the most-featured artist of the day. No fewer than 158 of its tracked music blogs posted about her today, while her “Bad Girls” song garnered the most mentions.

Madonna, on the other hand, failed to make either list. As far as the music blogs are concerned, she may as well not have performed at all. As one might suspect, the veteran popstar is rather upset about the whole thing; a spokesperson for the star told British tabloid The Sun, “Madonna wanted to put on a world-beating performance, but everyone ended up talking about this girl’s middle finger.”

The only rational conclusion to draw from this is that M.I.A.’s “rebellious” move worked as planned. One question remains, however: Wouldn’t it have been more rebellious not to appear as a back-up singer for Madonna at the Super Bowl?

In case you missed it, here’s the offending clip, which could yet cause M.I.A. to be slapped with a huge fine — assuming she signed a liability agreement with broadcaster NBC, the same way Janet Jackson did before her infamous wardrobe malfunction: 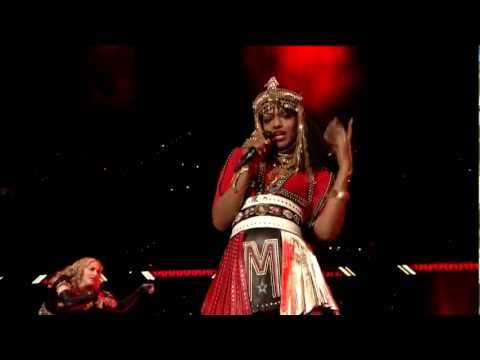