The motto of this website is “evolving music past the play button” for a reason: Music players have brains now, so they’re capable of more than just duplicating the linear playback of music, which the MP3 copied wholesale from physical music formats.

Listening to songs the same way they were recorded isn’t going away, of course — it’s just that new formats are emerging that let us play with the music in addition to playing it. Some of them are likely to become popular, as these brainy music players proliferate and replace the ones that are only good for rote reproduction.

We’ve been granted a sneak peek of a new app called Art Jam Universe, which Sound Selecta will unveil at the Consumer Electronics Show next week (maybe we should have gone after all). In a nutshell, it dissects songs into stems, which are the discreet tracks that make up a recording, such as bass, hi-hat, guitar, lead vocals, and so on. It presents some of these as loops, and others as “one hits” that only play once each time they’re activated, but more interestingly, this is what those stems look like on an iPad screeen:

Each song contained within the app comes with its own graphical art, which you play by tapping and dragging. Tapping a musical element lets you play each song’s stems, making each scene feel like one big sample-based instrument. And instead of a boring grid interface, you get a fun, cartoonish scene to look at. We found it responsive enough, even on a relatively slow first-generation iPad, to make “real” music — which you can record, once you’ve found your groove with a particular scene, and share with friends via Facebook or Twitter.

You can control loops with the buttons on the side of the screen instead of tapping the objects, which enhances the musical possibilities further, but touching the actual objects is more fun. Some of them even vary in volume when you move them around the screen, and you can unlock new loops and one-hit samples as you go.

We spoke with Sound Selecta co-founder and CEO Andy Richman to learn more about the direction for this intriguing app, and were mightily impressed. He foresees three main directions for Art Jam Universe going forward: as an app like the one pictured above, containing ready-to-go stems and artwork; as a platform with which bands can create their own Art Jam Universe-like apps; and as an advertising platform.

“The platform that we’ve built is kind of this new interactive format for music,” said Richman. “Now, obviously everyone likes to think they’ve created some new format, and I’m always pretty skeptical about that kind of thing. But I do think there is something quite different and interesting here.

“Obviously, we can create some proprietary apps with musicians, and bring either their own graphic designers, or we have great people we’re looking with, on a revenue share basism” added Richman. “We’re also really interested in the link up between bands and brands in the advertising space.”

Indeed, a display ad is one thing; tapping on a company’s logo to create music is another — and one that could benefit not only Selecta Sound and the advertiser, but the band which contributes their music as well, which would receive a chunk of that sponsorship money.

“Let’s imagine it was an ad for Red Bull, which is associated with extreme sports and the sort of nu-metal, post-punk sort of stuff. Imagine the ability to create ads which are entirely interactive, and enable the consumer to ‘layer up’ the music themselves, and then create these kind of new sub-ads, and share them out.”

To iron out the licensing details required for an app like this, which involved not only music but two other tricky rights — synchronization and derivative works — the Toronto-based Sound Selecta (whose other co-founder, Jamie Alexander, left a job in IBM’s idea lab to work on this concept about a year ago) hired Jodie Ferneyhough, the former managing director of music publishing at Universal Music Canada.

Musicians and labels need new revenue streams, of course, and this app could provide those in all of its incarnations, which is great. However, having played around with Art Jam Universe for a couple of days now, we’re equally excited about it as a way for users to remix songs on the fly. Why? Because it’s fun. 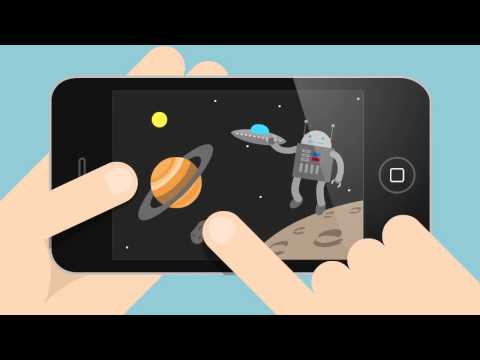