The number of noteworthy music apps in Google’s Android ecosystem is on the rise, but it’s still weak in certain sub-categories – in particular, music-making apps. Until recently, Android showed a real dearth of high-powered music-making apps.

This was a real buzzkill for musicians (myself included) who wanted to make music on our Androids in mobile settings. Latency problems at the core of the Android OS (originally very real, and later exaggerated) and performance inconsistencies due to variation of Android devices from various manufacturers drove away the developers of serious music creation apps. Maybe they were just tired of all those comments saying “It doesn’t work on my ___.”

Thankfully, Android’s latency problem was resolved, and the upshot is surprisingly-capable mobile apps including Audiotool Sketch.

Basically a pared-down version of the Audiotool web app, Audiotool Sketch for Android offers one melodic synth and two drum machines that clone popular analog sounds. It also makes quick, simple work of creating and editing beats, in stark contrast to apps like ReBirth for iOS, which have potential, features-wise, but look like the dashboard of a space shuttle.

Most importantly, for those that want to take this past the realm of “fun toy” and into the “useful tool” category, the output audio doesn’t sound like you made it on a cellphone, as is apparent even in the following video demonstration. (The app looks like it really shines on an Android tablet, but unfortunately our Kindle Fire, which ranks among the most affordable models, is not supported.) 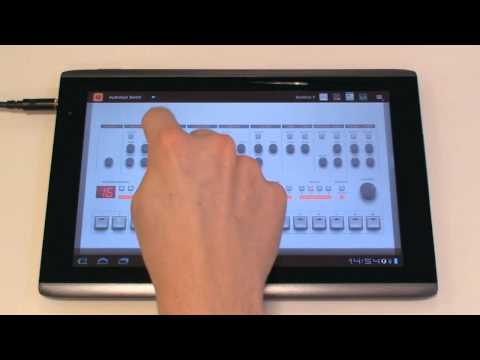 After setting the length of your melodic segment, you pick the notes in the melodic sequencer. Then, you can set accents and slides to each note and apply filters and waveform editors to home in on exactly the sound you want, while octave controls let you program bass and melody lines from the same interface.

And it scales, so to speak: Once you’ve programed a pattern, you can copy/paste it to one of the banks where you can edit and add variations, or randomize the sequence for automatic inspiration.

Two included drum machines work similarly to each other, but with slightly different sounds and ways to edit parameters. Working in concert, they provide a variety of rhythmic options. As with the melodic sequencer, you can also set the duration of drum sequences to be longer or shorter, to fit the groove.

An overview window handles the mixing of all of these elements. There, you can adjust volume and left/right panning for each virtual device and add delay (with adjustable mix and feedback). Also helpful: Pattern switching can be done from the mixing window, which means you could use this thing in a live composition/performance scenario. BPM is adjustable from this window with a simple slider, or by tapping — another essential feature in my book.

That about covers it, but this thorough video tutorial covers the features more in-depth — but really, for its current discounted rate of $1, which developer Audiotool says will be only through the end of the year, Audiotool Sketch is definitely worth seeing for yourself. 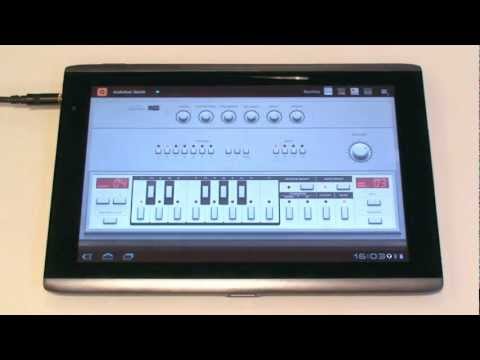