Photo of MOG running in a BMW: Eliot Van Buskirk

The car is the next frontier for digital music. Auto-makers, whose dashboards lag, by design necessity, behind the rest of the market for 18-plus months, are starting to capitalize on the power of music apps.

A large percentage of music listening happens in the car, so this is a welcome development for music fans — even if this integration is only rolling out in new cars at the moment. It will eventually “trickle down,” as they say.

We first spotted MOG running on a BMW Mini Cooper at SXSW in March. On Tuesday, in New York City, we saw — and briefly tested — the MOG iPhone app running in a luxury BMW. If that’s all you want to see, skip down to the video below.

The third app to be offered by BMW’s apps program (behind streaming radio service Pandora and BMW’s own app), MOG is the first music subscription service to offer millions of on-demand tracks within one of these cars. Crucially, BMW offers three hardware devices within the car for controlling playback without ever touching your phone.

“The amount of listening in the car is just huge, and so we see being able to access a variety of premium sources as being very important to the new car experience,” BMW senior engineering project manager David Bloom told Evolver.fm. “As far as apps go, we’re definitely very bullish on that. We see [apps] as a very strategic part of our future.”

In part, he said, this is because you can upgrade the apps in a car simply by upgrading them on a phone, instead of adding hardware to the dashboard. We concur.

To use MOG in a new BMW after the companies submit the as-yet unreleased, BMW-compatible version of the MOG iPhone app to the iTunes app store, you’ll need A) a new-ish BMW and B) An iPhone. You won’t get good results with an iPad, which doesn’t fit into the docking station (see video), and an iPod Touch will work, but requires that you cache music via WiFi before hitting the road, and really, one of the neatest things about unlimited music in the car is that you can stream anything that occurs to you with a lag time of only a couple of seconds, as we confirmed.

Here’s what we saw today when Bloom showed us MOG running on a new BMW (available “in a few weeks”): 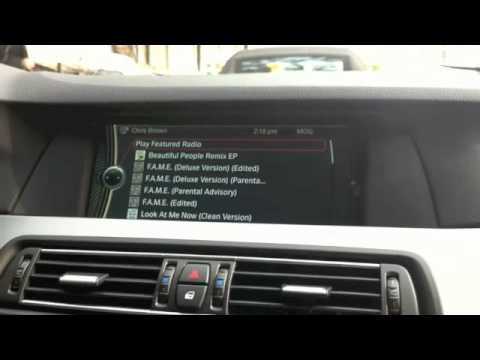