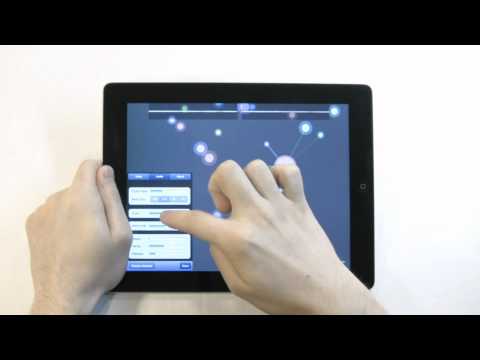 First, a story, by way of explanation: A few years ago at a Boredoms show, I watched, rapt, as singer and multi-instrumentalist Yamantaka Eye wielded two glowing orbs.

I still don’t know exactly how it happened, but as he moved those two spheres around in his hands, noises emerged that seemed controlled by the positions of the balls.

The sound changed as he moved them closer, then further away. When Eye (his name) gradually transitioned from calm swaying into erratic dance, the music changed again –what was once quiet and reminiscent of the ocean became raw and bracing. To this day, it ranks as one of the most awe-inspiring musical moments I’ve ever witnessed.

Now back to NodeBeat ($2), for iPhone and iPad, which doesn’t pack the same visceral punch as watching the Boredoms flail around onstage — nor would I want it to, now that I think about it. But it does remind me of that experience, because the app operates on a similar principle: Objects — or nodes — float around in space and their proximity to each another dictates the sound.

(Check out more ways to make music without really trying.)

It’s an interesting concept, and well executed here. Nodebeat has a pretty interface (reminiscent of the very cool, very expensive Reactable, made famous by Björk, who has her own impressive apps) and it’s easy to get started making music with it.

You can work with two types of nodes: generators and notes.

Notes only make sound when in close proximity to a generator, and the type of sound emitted from a note depends on which type of generator it’s close to.

Sound too complicated? It’s not. Once you drag a few nodes onto the screen and watch and listen as they interact, it’s way easier than it sounds.

(Pro tip: To help get the hang of this faster, go to node settings and make sure note movement, generator movement, and gravity are all switched on.)

No matter what you do in NodeBeat’s somewhat-controlled environment, the music almost always sounds good. If you’re an experienced electronic musician, though, you may crave slightly more user control over the sound.

That said, experienced musicians who spend enough time with NodeBeat will find parameters that allow them to sculpt the music to their liking. For example, you can turn the tempo up and use lots of percussion generators for Aphex Twin-like rushes of drums, or slow down the beat and turn attack and release all the way up for more chilled-out, ambient soundscapes.

NodeBeat offers a refreshing take on music-making for the iPhone and iPad sure to be appreciated by casual users and hardcore synth-heads alike. Either way, it’s cool, and at $2, a whole lot cheaper than Boredoms tickets.