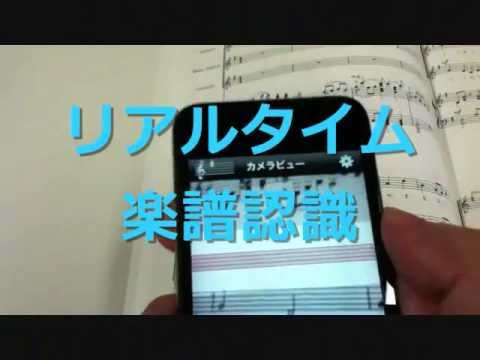 Wikipedia, among other resources, begs to differ – in part because the first commercially-available software capable of optical camera recognition, Musitek‘s MIDIScan, went on sale 20 years ago.

Nevertheless, we’ve never seen anyone pull off this particular feat on a cellphone, which makes Kawai’s Gakufu iPhone app (Japanese version only) newsworthy.

First, it’s a great learning tool, because while traditional musical notation somewhat resembles the vocal track in Guitar Hero and other karaoke games, it’s considerably more complicated. People who are learning to read it (especially to sightread it) can use all the help they can get, especially if it’s a simple matter of installing an app and pointing an iPhone at some notes.

This app also paves the way to a new form of sampling. You could point your cameraphone at sheet music (say, any of the tutorial books in your local Guitar Center superstore), convert any segment to MIDI, perhaps shift a few notes around, and use it in your own compositions.

Gafuku is only capable of reading pitches — not rhythm. It can’t distinguish between a quarter note and an eighth note, for example, but could still work pretty well in either of the above capacities.

This is the musician equivalent of the MOG cameraphone CD ripper we profiled in June — and just as cool, if not cooler, where curious music geeks are concerned.

(via asiajin and IT Media; thanks, John)