Music once, “by necessity, brought groups of people together,” as mentioned here previously, because before music was recorded, you had to be around the musicians, their instruments, and usually other audience members.

Recorded music made community less important to  listening, but it wasn’t until headphones came into play that music listening became an often solitary activity.

Richard Zelson’s MyStream (free) takes a new approach, using the iPhone’s WiFi and Bluetooth connections to allow users to stream music to each other. In order for it to work, the broadcaster and listeners must be on the same network, so this particular listening experience is more likely to occur among friends and people you personally know than with strangers and Internet buddies.

It’s simple. First, one individual on the network publishes a playlist using the music stored on their iPhone. Others can connect and stream the playlist, so long as that person is listening. Or, if the stream is not active, listeners, users can check out each song on the playlist as a thirty-second sample with an option to buy the songs on iTunes. Only the broadcaster can decide what the playlist contains, which makes this app akin to a tiny radio station.

MyStream looks great, sets up easily, and couldn’t be much easier to use. Again, it only works on a local WiFi network, which is somewhat limiting, but we can think of at least three situations where MyStream would be the perfect app:

1. You’re in college, you’re throwing a floor party, and you want to coordinate speaker systems in all sorts of rooms so that the same music is playing all over the place, but without installing hardware like Sonos or AirPlay.

2. You’re a big-shot record executive working with an about-to-pop artist whose material has, for one reason or another, remained under wraps and away from public consumption while you work out a distribution deal. You’re also shopping  a few commercials, and you want to show the ad man what the artist sounds like, in person, without worrying about leaks.

3. Silent Discos! Now you can throw a silent disco anywhere you want: 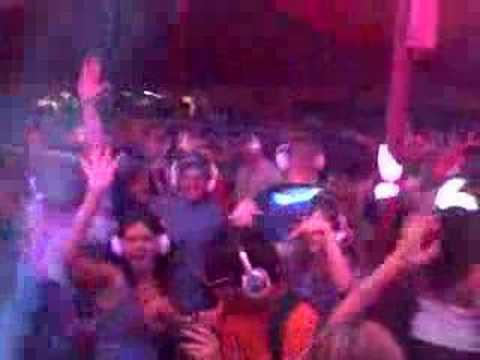