When we first covered Music WithMe back in December, we found a lot to like with this sharing and discovery app, which can also sync your iTunes library wirelessly to your Android phone.

However, we found one big problem: you could only share 30-second previews with friends — and sharing music with friends was supposed to be a major feature of the app, which lets you send out the currently-playing song on your Android regardless of what app you’re using to play it.

Why not just include the full songs by embedding YouTube videos, we thought?

It was the same issue we’ve seen with discovery apps in the past: Namely, it’s too expensive for apps like this to pay for full-track sharing. This brick wall is especially frustrating to hit when an app is meant to facilitate the discovery of new artists, because 30 seconds is not long enough to make a decision. That’s why we’re glad to see that Music WithMe made the practical choice to take advantage of YouTube (currently the third most popular website in the world) to enhance the app with full track sharing, as we had recommended.

Music fans have lots of options for sharing their music these days, but YouTube is the tall tree, casting shade over other providers of full tracks with its ability to let app developers include songs for free. Music WithMe’s integration with YouTube takes this app to the next level.

But it’s not the only feature — see also the Music WithMe desktop app’s ability to sync iTunes music to the iPhone over WiFi (a feature Apple plans to add soon). We ran into some bugs with this initially, but after installing the latest version of the app (and helper desktop app), Music WithMe loaded our iTunes library in minutes.

From there, downloading these albums, artists, or playlists to your Android phone was as easy as tapping a checkbox. Download speed varies from painfully slow to acceptably not fast (chalk it up partially to group WiFi), but let’s face it, if you wanted to load media fast, you’d plug your phone in.)

And the sharing function is pretty cool, allowing users to post songs via Twitter, email, and Facebook. Friends at the other end are then able to preview the song, buy it on Amazon — and as of this latest update, listen to the full song via integrated YouTube links.

From our perspective, the addition of a full playback option is what takes these kinds of apps from “cool for a couple minutes” to something we could see using more than once.

Want to know more about Music WithMe? Watch this video via (what else?) YouTube: 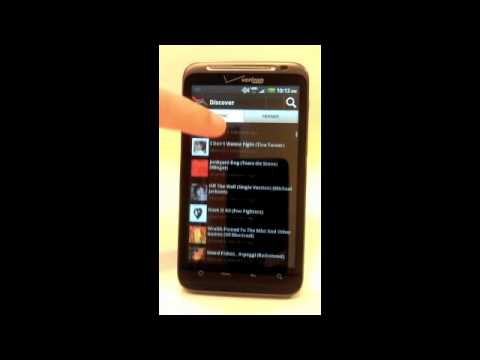