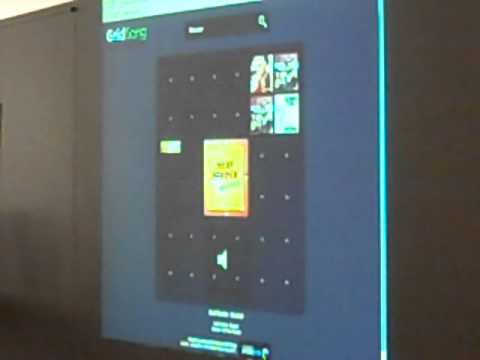 In the shift to digital music, album artwork has generally been lost in the shuffle — literally.

Reversing that trend, the Gridsong web app from Jeremy Sawruk and Will Mayo (still in development) puts the artwork for the currently-playing song front and center in the middle of a grid, with a selection of related album covers tiled around it.

More intriguingly, the positions of those suggestions allow users to pick the next track based on tempo or obscurity, using an API from The Echo Nest (publisher of Evolver.fm). Faster recommendations are placed above the current song, with slower ones below. Tracks on the right are more familiar, tracks on the left more obscure.

Gridsong, described by its developers as a “visual playlist viewer,” demands lots of bandwidth and processing juice, because it has to analyze the tempo and popularity of your current song choice while loading 35 album cover images for each new song, so it might not make much sense on, say, a smartphone. But on fast, well-connected machines, this hack (presented at Music Hack Day New York) offers a clean and elegant interface to move through any dynamic playlist, while imbuing navigation with meaning, rather than merely layout.