When Khush debuted its LaDiDa app early last year, the world probably didn’t know it was ready for “reverse karaoke,” a process through which a singer records a song a capella (without instrumental backing), which is then padded, transformed, harmonized, orchestrated, and given a beat by artificial music intelligence, all tailored to what the singer sang.

If you can carry a tune — or not, thanks to LaDiDa’s optional autotune — you can create your own real song suitable for sharing on Facebook, Twitter, email, or wherever.

And it works. Even if you sing as poorly as you possibly can, or think you’re a naturally lousy singer, LaDiDa cleans up your singing with autotune and adds some reverb to make your voice sound better, or at the very least more professional, in addition to adding a backing track in the musical style of your choice. And if you’re highly allergic to autotune, or like the way your voice sounds just fine on its own, thank you very much, you can control how much those affect the sound or turn them off completely. 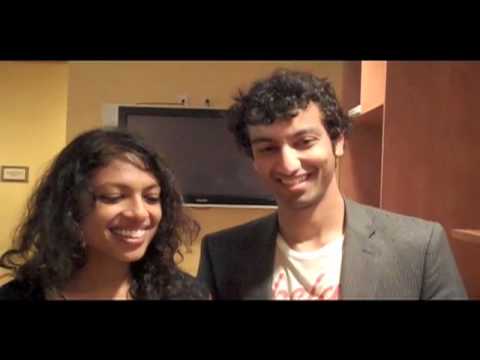 That video is approaching 25,000 views on YouTube — just one small measure of LaDiDa’s success over the past year-plus, during which the app has consistently ranked among the top paid music apps in iTunes app store. Another: Khush is now officially profitable, according to what Gupta told us in the following interview. What follows is a lengthy transcript, edited for clarity and length, but an interesting one — and at the end, you can hear the interviewer trying to sing out of key through the LaDiDa app.

Eliot Van Buskirk, Evolver.fm: Let’s start with the success. Were you surprised to see LaDiDa jump up to number four on iTunes music app section — that so many people are into reverse karaoke? What has the experience been like, watching this happen?

Prerna Gupta, CEO of Khush: We believe that music creation apps are a mass market product. Our goal is to make music self-expression as ubiquitous as social expression is today, and we think that’s something very fundamental that the majority of the people in the world are interested in, and will start doing in the next few years. Obviously, it’s always a little bit surprising and gratifying when this actually happens and you start to succeed, so that’s been amazing for us, but we still feel like it’s just the beginning in terms of the opportunity for mobile apps and for music creation apps. There’s still huge room for growth.

Evolver.fm: Who are all these people using LaDiDa?

Gupta: The demographic that we’ve [mainly] reached so far is 13- to 17-year-olds. It makes a lot of sense for us to start in that space, because people in that age range are generally much more open to singing, and music is such a huge part of your life when you’re that age. But we don’t feel that that’s the only demographic that LaDiDa is relevant for. We want to go both younger and older.

Evolver.fm: What do you think older people want to sing about? I see where you’re coming from, but I can also see how some might wonder how much this really scales into the adult world. Do you envision people leaving each other business messages in song, or how do you envision adults using this?

Gupta: Right now, it seems to most people that music creation is something that musicians do — and maybe five-year-olds — but not an average adult in the United States. That’s probably true, but it’s actually very recent. Humans have created music since the beginning of time, and music has been a fundamental part of the human experience for years and years and years. Some people actually believe that music was the precursor to speech.

If you think back to the early 2000′s — before Facebook got started, and when social networking first came around — it was like, are adults really going to do this? What self-respecting adult is going to put their picture up on MySpace and connect with people using a picture of themselves?

It seemed crazy. And I understand that people have that reaction now [to LaDiDa], but we think that the joy of creating music doesn’t need to be restricted to professional musicians or little kids. I don’t think it’s going to be business messages.

Evolver.fm: How is the concept of reverse karaoke evolving? Are there any leaps that have happened, or that need to happen?

Gupta: The very first version was just reverse karaoke, and there was no pitch correction or reverb, so we weren’t doing anything to make you sound better. All we were doing was adding accompaniment, which was was a huge barrier at that stage. People felt, basically, intimidated, and not confident enough with their voice to really do that.

What that said to us was that there’s this fundamental desire to make music, but we in the modern world don’t really spend that much time learning how to do that, right? If you look maybe 100 or 200 years ago, music creation was a part of everyday life. Whether you went to church a lot and sang there, or whether — there were a lot of social gatherings where people were coming together and making music, so they had a certain comfort level with doing that. We’ve certainly lost that in the modern world.

What we need to do with a product like LaDiDa is bring back that comfort for someone who hasn’t spent their life singing on the fly, and help them feel more confident about that using technology. Every new feature that we add to our product — and future products as well — has the goal of making music creation more intuitive and less scary.

Evolver.fm: I assume that you don’t sit there listening to every single upload that goes through the system, but I also assume that you must have some favorites, whether it’s funny uses of it, or particularly effective ones. [If you have the app, you can search for other people's recordings.]

Gupta: Some of the most gratifying ones are from people who just have really beautiful voices. A lot of the time they’ll make original songs; the accompaniment that they choose just works really well, and it sounds like they ought to be professional singers. Sometimes we’ll get emails from those people saying, ‘I’ve wanted to sing my whole life, but I’ve never taken the time to do that or known how to make music.’ That’s really the goal. We want to help people who have that desire and have that dream, but really haven’t taken the steps.

The funniest stuff — we have video — is of a really beautiful dog singing along with LaDiDa, so she actually howls into an iPod and it turned that into a song, and that was really — some of the stuff where people try to hack it and do things that aren’t intended end up being the best. [Interview continues below.]

Evolver.fm: That reminds me of the painting elephant. It makes the dog a composer, and the dog definitely deserves a treat for that. So what’s next? You’re starting to have a little bit of competition in this area, so you probably don’t want to tip your hand, but is there anything on the roadmap that you can talk about? New platforms?

Gupta: Some of the stuff that we’re looking for is pretty obvious. As much as we love the iPhone platform, it’s probably time to start expanding, so that’s definitely on the horizon for us. And new apps. I think we’re at a stage where there’s still tons we can do to LaDiDa to improve it, but we’ve had so many other app ideas that we’ve just been sitting on. I think we’re ready to get another one out there.

Evolver.fm: The last time I checked, LaDiDa was number four [on iTunes top music apps chart]. Is this, like, a retire and move to Hawaii forever type of situation?

Gupta: If it just had been Parag, me and [creative director] Alex [Rae], we would have been in pretty good shape, but we think of ourselves as a computer tech start-up. We have big goals, so we feel like this is just the beginning. We feel very thankful that we’ve been able to come this far, but we want to keep growing. I will say that we are profitable. We’re making serious money, but for us, we want to take this profitability and hire more people and expand.

Evolver.fm: It’s interesting to hear you say that the app phenomenon is just starting out. Do you feel like the whole thing is still expanding significantly?

Gupta: Absolutely. And you see it. Christmas was amazing — there was such an explosion in sales, and basically what happened is people were bought iPhones and iPods and iPads.

You still get people who say, ‘Oh, you’re just doing an iPhone app, is that really going to make money?’ And to us, that’s just crazy, that people think of it that way. It’s not something that’s going away. It’s not a fad. It’s just getting bigger and bigger. The iOS platform is just beginning, and Android is brewing.

Evolver.fm: Do you feel like either of these app stores deserves their 30 percent [of revenue from app sales]?

Gupta: I do, actually. I’m happy giving them that. They provide a great service. The other thing is, when you get a surge in sales, not having to worry about if your site’s going to stay up. Almost everything that we do is on the device, so that’s been great — to have our user base grow and not worry that much about scaling. For things like that, it’s worth 30 percent.

The 99 Most Essential Piano Pieces