When was the last time you really listened to music, letting it suffuse your mood like so many leaves in a teapot, as opposed to listening while you multitask or bang your head against the steering wheel in traffic?

Aweditorium , free on the iPad, is the work of The Sixty One (a music discovery website that lets users earn points by listening to certain songs, and shares similarities with Aweditorium).

It offers a truly immersive music experience. Don’t stop reading yet though.

Yes, the word “immersive” gets bandied around far too much by social media experts, but just because it’s overused doesn’t mean it doesn’t apply here. When it comes to immersing yourself more deeply in music, Aweditorium lives up to its name with a big, Brady Bunch-style grid of thumbnails (somewhat akin to We Are Hunted) listing some of the most talked-about tracks today, which play for free. As with most other music apps, headphones or a speaker connection is highly recommended.

(Apple’s promised AirPlay integration can’t come soon enough; what that happens later this month, apps like Aweditorium will be able to stream wirelessly to Apple TV and a wide variety of speakers and sound systems.)

The Aweditorium app is a simple pleasure to use, and doesn’t get in the way, although what is there, looks pretty (screenshots below). Lyrics scroll along at the bottom of the screen, while little Pop Up Video-style trivia nuggets appear to keep you focused on what you’re doing and not check your Facebook news feed again. You can even drag the tips around if you want. And a simple tap of the screen tells you who the band is and where they’re from — simple, elegant, and engaging.

Immersion is as immersion doesn’t.

If you’re going to get into your tunes with one of today’s harried attention spans, the lyrics and trivia nuggets go a long way towards keeping you focused. And if you don’t want the nuggets (especially because they make a blipping sound you can’t turn off), you can tap again to turn off the menu and switch back to seeing the lyrics and photo, sans blipping sound.

Text nuggets pop up to tell you more about each band as you discover them.

When you eventually do get bored of a song before it finishes playing, swipe in any direction to skip to that song on the grid or pinch the screen to zoom back out and look at the whole map. Wherever you go, play controls follow, which is as it should be.

Synchronized lyrics appear at the bottom of the screen.

Other nice touches: a beautiful automatic crossfade between tracks that makes your switches sound planned, the ability to share tracks via Twitter or Facebook (anyone with an iPhone or Android can hear the tracks), and YouTube integration, so that if you decide you want to delve in further, you can.

If you want to buy a song, Aweditorium has an iTunes button accessible via the Heart button; if you use a subscription service or want to use another store (updated), you’ll have to remember the names of the bands you like with your actual brain — or, just check your Facebook/Twitter history, if you’ve used the Share feature. 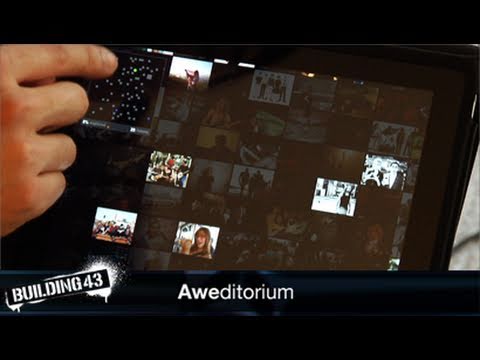 My Cloud Player for SoundCloud
Die For Metal