I do not like Eddie Vedder, but most other people listening to this station do.

FM radio is under assault from interactive webcasts from Last.fm, Pandora, Slacker and other online services that tailor their playlists to your specific taste rather than relying on FM radio’s shotgun approach, which blankets entire metropolitan areas with a single “one-size-fits-none” playlist.

Now that you can plug a smartphone with an unlimited data plan into your car stereo and listen to Pandora etc. to your heart’s content on the highway, as I’ve been doing recently, FM radio feels even more like a relic. But one company has found a way to attract digitally-inclined listeners by offering them some of the same features they get with online radio on terrestrial radio: Jelli, which lets listeners vote certain songs up or down in a playlist before they play, and even pull a song from the air midway through, if enough listeners throw enough virtual tomatoes.

Over a year after its impressive launch, Jelli has finally taken its web app to the next logical place: the iPhone.

Install the free Jelli app and you’ll be able to help control the programming on any Jelli-using FM radio stations nationwide (San Francisco’s Live 105; Boston’s Radio 92.9;  Las Vegas’s X 107.5; Trenton, New Jersey’s 94.5 PST; New York’s K-Rock; Missoula, Montana’s 107.5 ZOQ;  and Long Island’s 106.1 BLI). If you don’t live near one of these, though, you can still get in on the action by accessing any of those stations online — or by listening to and helping to control Jelli’s multiple online-only stations on the web, and now, the iPhone.

It’s simple: As you listen, tap buttons for Sucks (to vote something off the air) or Rocks (to keep it on) and vote upcoming songs up and down in the queue; use your powerups to boost or sandbag certain songs in the playlist; and search for music to add to the playlist, where others can vote on it. If they like your choice, it’ll play over the airwaves (or online), which sure beats trying to be the 105th listener.

Jelli doesn’t decide which song it’s going to play until seconds before it gets played on the air, which essentially turns radio programming into a sort of large social game. KITS-FM general manager Doug Harvill said this approach “doubled” ratings in the 18-49 demographic in the first hour during which he deployed the service, and Live 105 staff told me something similar when I profiled Jelli for Wired.com last year.

“Almost a quarter of a billion Americans listen to radio every week, and two thirds of it happens away from home,” said Jelli CEO Mike Dougherty in a statement.  “The Jelli iPhone app makes it easy and fun for listeners to participate in a community of music fans, and to control their favorite radio station on the go.”

The glass is half full for radio, in that 250,000,000 people in this country, give or take, tune in to FM radio in a given week. But it’s half empty in that radio has all those listeners to lose and plenty of ways to lose them, as internet radio rolls out to that last FM bastion: the car.

The National Association of Broadcasters (NAB) is so worried about the future of radio that it recently asked Congress to require smartphone manufacturers to include an FM receiver in each unit. The NAB cited the Emergency Broadcast Network as one reason people still need radio — but perhaps by adding new features, like the ones Jelli is pioneering, radio will be able to thrive in this digital era without becoming legally mandatory. 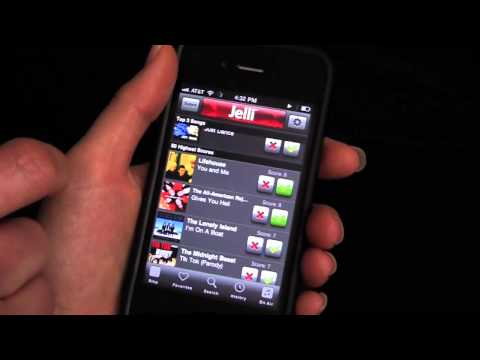