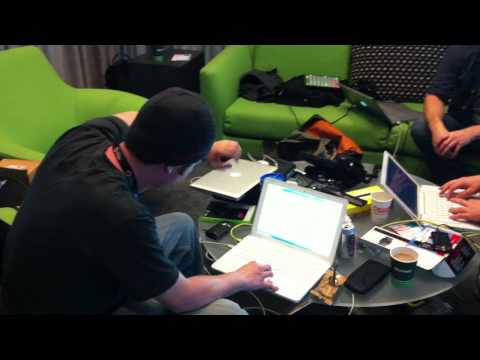 A mere three hours into this year’s Boston Music Hack Day, a group of hackers who found each other on an IRC channel had already managed to build a system that allows people to create music through gestures while wearing an accelerometer-enabled watch.

Robby Grodin, a computer science and music technology major at Northeastern University, built part of the software in Max/MSP during one of his classes yesterday. This morning, while listening to companies at Boston Music Hack Day present APIs for all the hackers to play with, Grodin asked via IRC who else wanted to build something with Max/MSP. Among those to respond was freelance hacker Lindsey Mysse, whose Texas Instruments EZ430 Chronos watch recently arrived following a lengthy back order. Their team quickly ballooned to a small de facto development group, which colonized a at Microsoft’s NERD Center in Boston. None of them expected to have the thing up and running so quickly.

Here’s how it works: The watch’s accelerometer tracks acceleration in the X, Y and Z axes, and sends that information via RF to a dongle attached to Mysee’s laptop, which then passes it wirelessly to a frequency modulation synthesizer Max/MSP patch on Grodin’s laptop, which turns the movements into sound. The X access is the carrier frequency, the Y axis is the modulator ratio to the carrier, and the Z axis is the index of how many sidebands are generated.

However, the potential applications go much further.

“I’m not getting a whole lot of complex sounds just yet, but this is just the start,” said Grodin. “I really want to use it to control sample-rate playback, so you could actually be scratching without vinyl. The possibilities are endless because you’re getting three channels of raw MIDI data, and that’s something you can do anything with.”

Myssse, a visual artist who bought the watch to capture the performance of drawing as data, figured it would come in pretty handy at Music Hack Day. He was right.

“When I came here, of course, there are like five new ideas, everybody gets excited, and we’re figuring out brand new things to do with the accelerometer that I didn’t consider,” said Mysse.

That sort of collaboration between like-minded strangers is at the crux of this event. It would cost over a million dollars to pay all of these developers to work through an entire weekend; instead, they showed up because by teaming with other hackers with complementary skills, they can create fairly complex stuff like this at breakneck speed. Before much of the country had woken up on Saturday morning, they built a gesture-controlled music system.

“We want it to be flexible but provide a couple of patches to get the ball rolling, so someone can buy the watch, put it on, pair it with their computer, and five minutes later they’re jamming out with no instruments,” said Mysse.

“The current codename is Toscanini and it will be freeware,” stated Grodin.